History of the History Teacher 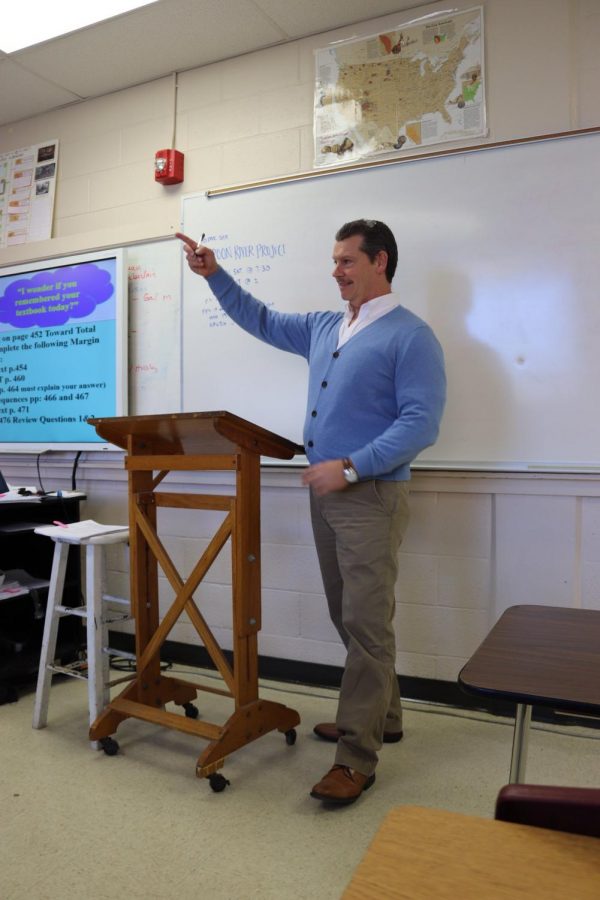 Stephenson educates his AP U.S. History class on the battles of the Civil War. His perfected method of teaching includes powerpoints and interactive questions to engage students in the subject.

Michael Stephenson never planned to become an Advanced Placement History teacher at White Station High School, but his love for history, teaching and our school has made him an integral part of the Spartan community.

Originally aiming for a PhD in astronomy at the University of Memphis, Stephenson was undecided, switching his major several times. After Stephenson declared a major in journalism, Dr. Orr, his history professor, saw where his strengths really lay.

“He took me over to the administration building, and I changed my major,” Stephenson said. “I’ve been a history dude ever since.”

Stephenson’s interest in history not only comes from his professors but also from his personal teachers: his grandfathers, whose stories of the Great Depression and World War II showed him the light and goodness in teaching others.

“The inspiration [to be a teacher] was really because I sat around listening to old folks talk about history,” Stephenson said.

With his passion for history and his sights set on teaching, Stephenson established his career as a teacher at several schools, including Overton, Craigmont and Whitehaven before transferring to White Station in 2005. Although Stephenson had taught high school for 11 years, he still yearned to go further.

“When I first came to White Station from Craigmont, I was working on my PhD in history, but I never finished it because I would have to quit working,” Stephenson said.

Situated at White Station for the time being, Stephenson’s admiration for the school grew from its atmosphere of hard work and acceptance, making way for his long-held tenure.

“Well, the diversity and inclusiveness make it incredibly unique,” Stephenson said. “I can’t imagine many other schools in Tennessee that could match this.”