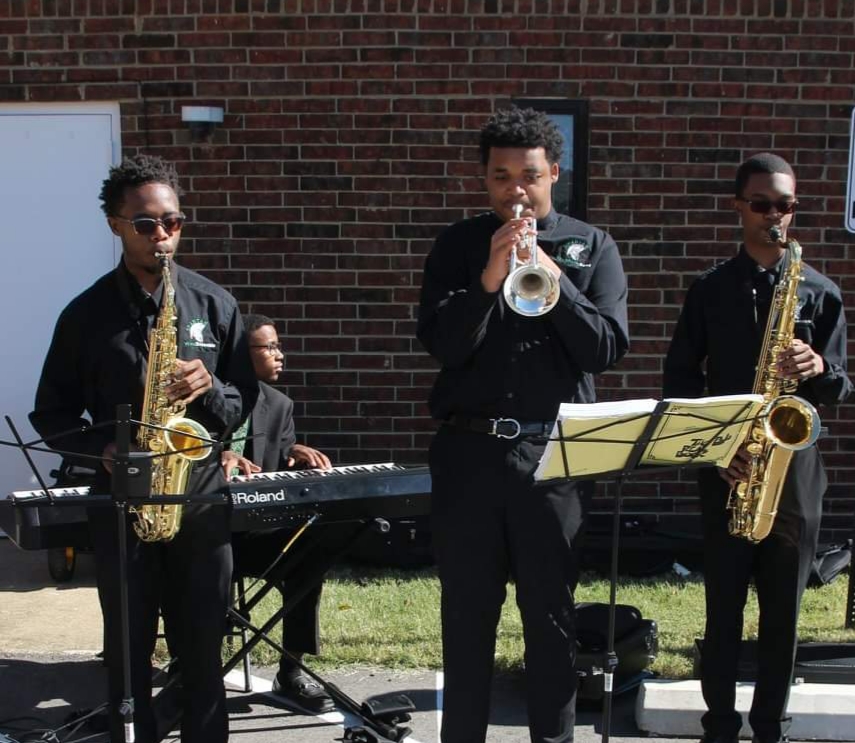 Myles Robinson (12) on alto saxophone, Daniel Harvey (12) on piano, Jaden Ross (12) on trumpet, and Joshua-James Claybon on tenor saxophone play Lee Morgan’s “Ceora” for first responders in downtown Memphis. This song was one of many chosen by the players themselves to perform.

Several members of the White Station Jazz Band joined together Saturday, Nov. 2 at an event commemorating first responders for their dedication and hard work. This performance in front of first responders was just one of many combo showcases the group has performed for the public.

“We go about once or twice a month. Normally, either the band director, Mr. Sims, will set up a combo event somewhere else, or a place will ask Mr. Sims for us to play for them,” says Myles Robinson (12), lead alto saxophone in the jazz band.

These combo events typically consist of a couple of wind instruments, such as trumpet, trombone and tenor and alto saxophone, as well as drum set, piano and bass. Unlike small combo sets, big bands can be up to four or five times the average combo set. The biggest difference between combo-style jazz and big band jazz isn’t the size, though—it’s freedom.

Having the ability to choose a certain style for a song is important for all genres of music, especially jazz. Some jazz songs have been reproduced multiple times by different artists, each one adding their own twists on rhythm, harmonies and intonation. Choosing and agreeing on a certain style for songs in a jazz combo allows players to imprint their own identity on the music they play.

Freedom in a jazz combo set is not only apparent in being able to choose one’s own music, but also in the art of soloing.

“Being able to play in combos, I get the opportunity to solo more. In big band I do get solos, but not as often as in combos,” Robinson said.

Freedom in a jazz combo set is not only apparent in being able to choose one’s own music, but also in the art of soloing. Soloing is the ultimate freedom of expression in jazz. In a combo setting, the floor is much more open and is essentially the soloist by himself. Every combo song will have an open floor to solos because the open setting and freedom is the perfect atmosphere for a soloist. The artist has the ability to play unlimited combinations of melodies and rhythms, using a variety of inflections and articulations. The element of freedom in jazz from choice of style and soloing gives the genre its unique style, appealing to audiences everywhere.