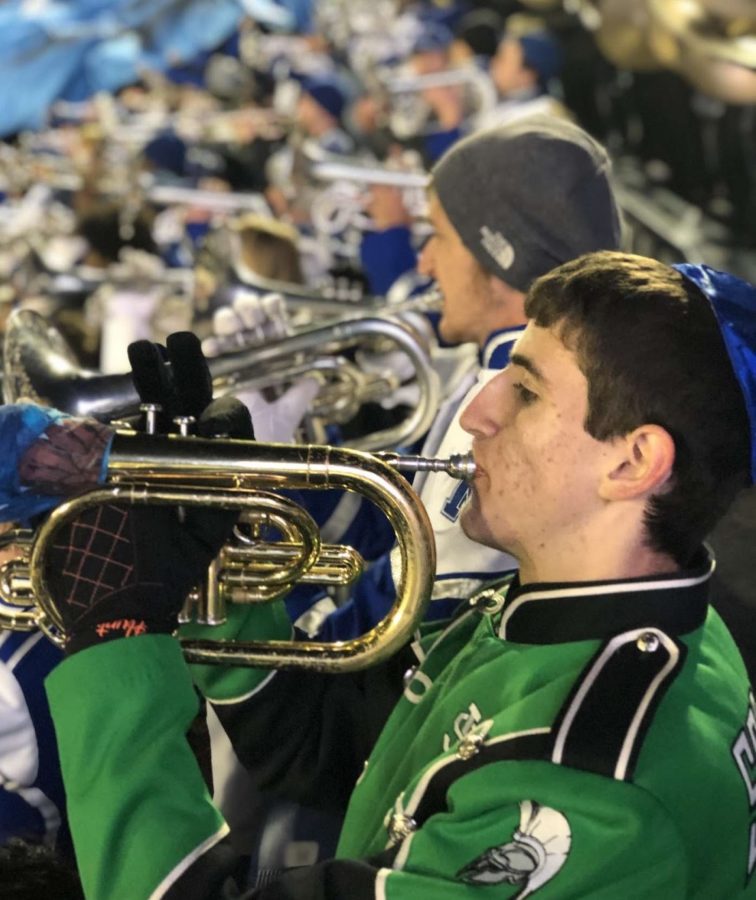 Cody Hunter performs alongside fellow mellophone players from the University of Memphis marching band. Cody attended his third Band Day this year and learned new skills from U of M students, despite being a senior.

The trumpets roar, the trombones blast and the saxophones sing. The University of Memphis marching band performs in front of tens of thousands every Saturday as the Memphis Tigers take on their opponents.

However, the Nov. 2 matchup against the SMU Mustangs at the Liberty Bowl was different than usual for the marching band. This particular Saturday was Band Day, a day in which the University of Memphis marching band opens its doors to high school band students all around Memphis to play alongside them.

“The students that come represent about 36 different high schools from Memphis and the surrounding areas. There were some people there that did three-hour drives to come,” Cody Hunter (12), who plays mellophone in marching band said.

While hundreds of students come to Band Day to play with the marching band, they also come to gain insight on college and the commitment required to be in a college marching band.

“You can learn from the older people how to better play the instrument. How they hold their instrument and how they play it is more professional,” Steven Groff (12) said, who also plays mellophone. Groff plans to attend the University of Memphis and aspires to be in their marching band.

“I have always wanted to go to the U of M and be in band, but being a part of Band Day strengthened that want to be there,” Groff said. Interacting with college students at meal time before the game showed Groff the helpfulness and inclusivity of the Memphis Band.

Band Day offers more than just fun and excitement from playing with the band and interacting with college students. Student leaders from bands all around the Memphis area have the opportunity to play with a disciplined college band and acquire skills and knowledge that will help them in their music careers. These students are also able to take home these skills and share them with their bands.

“It gives me a new sense of motivation to try to better myself and to better the band,” Hunter said. As vice president of the White Station marching band, Hunter feels obligated to work hard and find ways to make the band better.