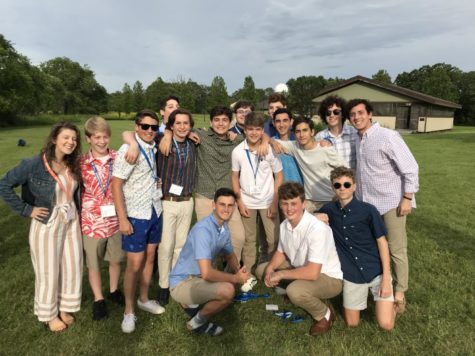 Jonas Kannady poses with other members of the World Leadership Team on a leadership project.

The B’nai B’rith Youth Organization (BBYO) recently welcomed one of White Station’s students, Jonas Kannady, as a member of the group. Jonas was accepted into the organization’s Global Leadership Academy on Sept. 29th.

BBYO is an organization for Jewish teens to get more involved in their culture. The organization has many opportunities to build connections with other Jews both in and out of Memphis. To spark this interest, representatives  from the different chapters begin by speaking to ninth graders.

“At the beginning of ninth grade, there is a rush event where they try to recruit a bunch of Jewish teens,” Jonas said.

In his chapter, Jonas’s job is to recruit new members, and in his region, his role is to coordinate conventions and assist people who are struggling. Not only does Jonas help with his chapter and region, but he also participates in the Global Leadership Academy.

“Internationally, I am GLA, which is a group of 22 teams from across the world that get selected,” said Jonas.

However, to get into the Global Leadership Academy, an application must be written, and the teen must meet all of the needed requirements . This program specifically chooses people who are most likely to continue  the program through their last two years of high school and be on the leadership board in the future. The GLA‘s main focus is to create better leaders in the program.

“We basically just do a bunch of leadership projects in our region or locally.” Jonas continues, “They are mainly just different types of things to help us become better leaders,” he said.

Originally, Jonas joined because he saw how much his friends enjoyed it. As he continued further on with BBYO, he realized he was gaining a lot from it: relationships with people around the country, leadership skills, and more knowledge about his Jewish culture.

“One of the coolest parts is the number of people you know in different places,” Jonas said.