Unprecedented offseason ushers in a new era of Grizzlies basketball 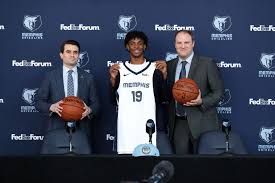 The Grizzlies, who have traditionally remained quiet in the offseason, made a flurry of moves that dramatically changed the landscape of both the team and the NBA.

After the firing of former head coach J.B. Bickerstaff and the demotion of former General Manager Chris Wallace, the Grizzlies front office, led by new GM Zack Kleiman, set the tone for a new era of Memphis Basketball.

The Grizzlies started off the offseason by getting the #2 pick in the NBA lottery, despite being projected to get the #8 pick. This pick turned into Ja Morant, an exciting point guard from Murray State. The Grizzlies also drafted Gonzaga forward Brandon Clarke, who won the NBA Summer League MVP. The young duo will be paired up with 2019 All-Rookie First Team selection Jaren Jackson Jr.

“I am very, very excited about the up-tempo, explosive highlights that are bound to come from Ja, Jaren and Brandon Clarke,” Zachary Palmer (11) said. “I fully believe that with those three… we will have the most exciting Grizzlies team in recent memory.”

However, the arrival of these new faces meant the time had come for some older faces to move on. One of these faces was star point guard Mike Conley, who was traded to the Jazz for Grayson Allen, Jae Crowder and a future first-round pick and the 2019 #23 pick, which became Brandon Clarke. These new acquisitions were generally well-received by fans, but saying goodbye to Mike Conley was still bittersweet for many.

“Although I am well aware [the trade] was necessary and we got a good return for it back, you can never be happy when your favorite player is traded from your favorite NBA team,” Palmer said.

This offseason showed that the Grizzlies were willing to be more active and daring than they have been historically. However, the front office still has plenty of questions to answer. Will the young trio of Ja, Jaren and Brandon Clarke be able to mesh and develop together? Will next year’s team suffer from a lack of chemistry? And, most importantly, when will the rebuild be over in Memphis? Only time will tell if the risks the Grizzlies took this offseason will reward the franchise and its fanbase.