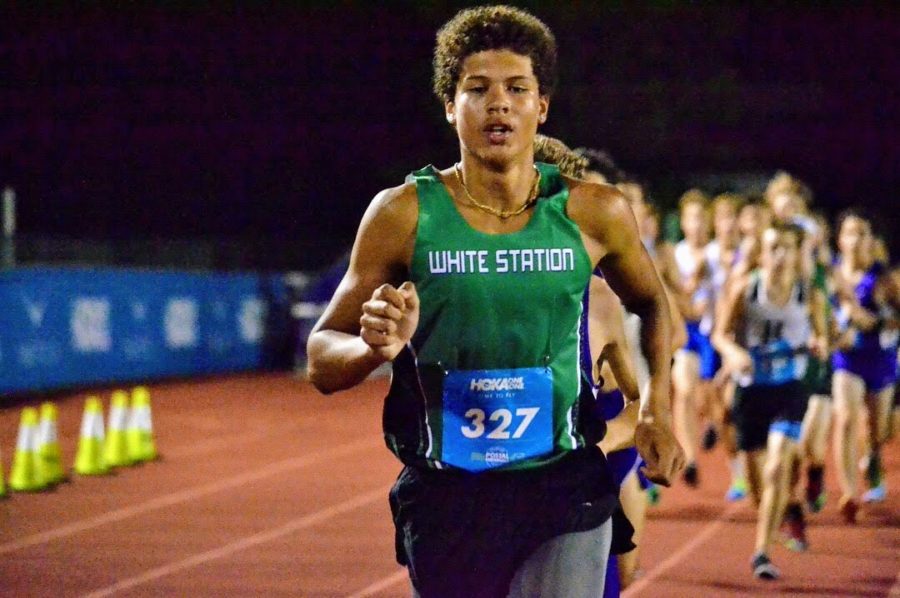 At the HOKA Postal Nationals earlier this year, Jamieson Nelvis (11) placed first in his heat of the 3200 meter race, which includes competitors from all over the Memphis area.

Running track since the second grade, junior Jamieson Nelvis has proved to be one of the most valuable assets on the White Station track and field team. Nelvis also runs for the school’s cross country team in the fall and for a club track team, the Memphis Jaguars, as part of the Amateur Athletic Union (AAU) in the winter.

Nelvis had just been running in elementary school P.E. class, but since his dad worked with the coach of the Memphis Jaguars team, Nelvis began running track competitively when he was seven years old.

Despite running for much of the year with 2-hour practices almost every day, Nelvis credits the intensity of the workouts and his drive to improve with helping him persevere.

“What makes him so special is that he is very coachable. He receives criticism very well,” Sergeant Myers, head coach of the track and field team, said. “He is always one of the top finishers. Over the years he has displayed signs of greatness. His finishes have always ranged in the top three percent of his events.”

As one of the better mid-distance runners, Nelvis has a promising season ahead of him. One of his personal goals is to run the 800 meter race in under two minutes. Currently, Nelvis’s personal record for the 800m is 2:01 minutes, and he wishes to eventually cut it down to 1:55 minutes. This year’s track and field season starts in early March.

“The regular season is not that competitive because there aren’t that many teams out there, but the city meets, sectionals and state––that’s where it gets competitive,” Nelvis said.

Although his preferred race is the 800 meter run, he also fares well in the 400 meter and the 3200 meter races.

This year, Nelvis hopes to qualify for state and to place there, as well.