Knowledge Bowl: The Super Bowl of the Mind 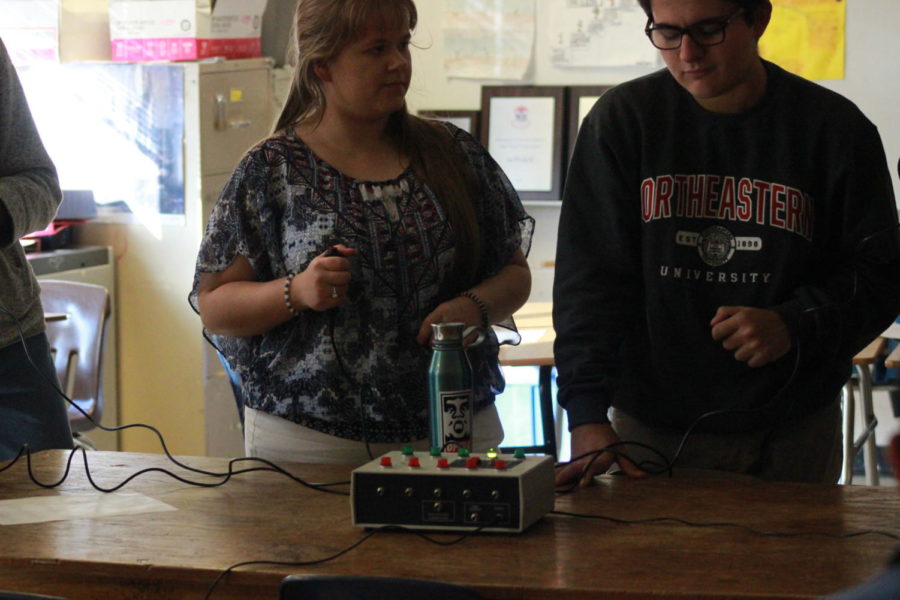 Tara Sandlin (12) and Gino Giorgianni (10) practice with buzzers to simulate a tournament and practice their Knowledge Bowl skills.

Two teams going head-to-head. Recalling information from various categories including history, literature, popular culture, sports, science and math. Racing against time and the buzzer. Earning points all in pursuit of winning thousands of dollars in scholarships and bragging rights.

The White Station Knowledge Bowl is a group of students who gather weekly in order to answer academic questions for points. They compete with other schools on WREG News Channel 3, but for those not on the TV team, Sr. Insch has created an off-screen quiz bowl team that competes with other schools and fellow students.

“We practice throughout the week, go to competitions on Saturdays, we film for TV stations and have a lot of fun. Last year our TV team won, and we got to go to Nationals in Atlanta,” Tara Sandlin (12), team captain and middle school outreach coordinator said.

According to the NAQT, National Academic Quiz Tournaments, LLC., White Station’s Knowledge Bowl team has ranked in the top 5 out of 24 teams for the past few years with an average of 2,260 points this year alone.

“These kids bring to it a lot of work, a lot of effort, and they bring what they are learning in their classes,” Señor Insch, the coach for eight years, said. “Their knowledge is astounding. It’s amazing.”

self-esteem and confidence, but also helped them outside of tournament life.

“I have to study for Knowledge Bowl,” Alternate Gino Giorgianni (10) said. “Current events, art, history and literature—all sorts of things—and that’s helped me in a lot of my classes.”

Knowledge Bowl is a great way to test your knowledge on a wide variety of topics and potentially earn some money in the process.

“We won first place, so everyone on the team, including the alternate, got $5,000 in scholarship money,” Sandlin said. “It changes year to year, and has been as high as $7,500.”

Knowledge Bowl encourages others to come and test their knowledge.

“It’s a really fun experience, but it is academically rigorous, so be prepared,” Giorgianni said.