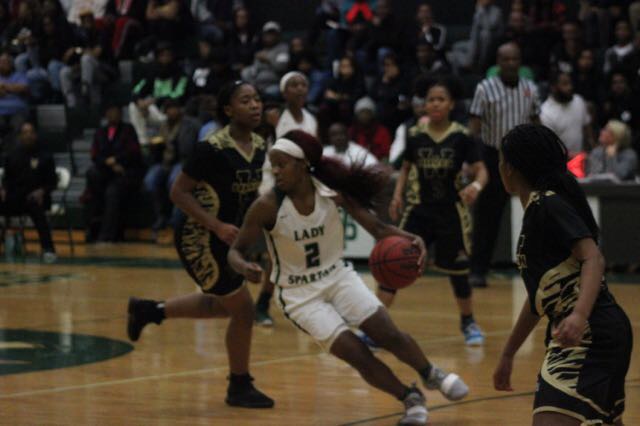 Alaina Price (11) dribbles around a Whitehaven defender. The Lady Spartans won their homecoming game with a score of 61-54.

The final buzzer sounds, ending the Lady Spartan’s first game of the season. The scoreboard reads White Station 65, Melrose 48. The Lady Spartans steal their first win of the 2018-19 season.

“As a whole, we’re bonding more and we’re playing better than we did last year,” Alaina Price (11) said.

The team has dealt with the loss of seniors and the addition of two freshmen, but they have found their groove, with a record of 14-6.

“The team chemistry started out pretty rocky, but I think it’s getting better,” Kyla Mason (10) said. “We’re learning how to work together and how to talk to each other.”

The season hasn’t always been easy for the Spartans, who lost three out of their first five games, but they soon bounced back.

Due to its fairly young nature, the team had to quickly form chemistry between its new and returning players.

“The toughest part of the season has been getting everyone on the same page,” Mason said. “Some people learn slower or faster than others.”

However, experience does not get in the way of the bond that the team has formed.

On and off the court, the players enjoy the experiences they share with one another. They’re friends in their everyday lives as well.

“My favorite part of the season has been building friendships,” Mason said. “We’re friends in basketball and outside of basketball.”

Heading into the end of their season, White Station has their eyes on a specific goal—to make it to the state championship in Murfreesboro on Saturday, Mar. 16.

“My hope is that we can keep our bond,” Price said. “Even if we have tough times, we need make it through and get those wins that we need to go to state.”