Back from the past: the return of the color guard team 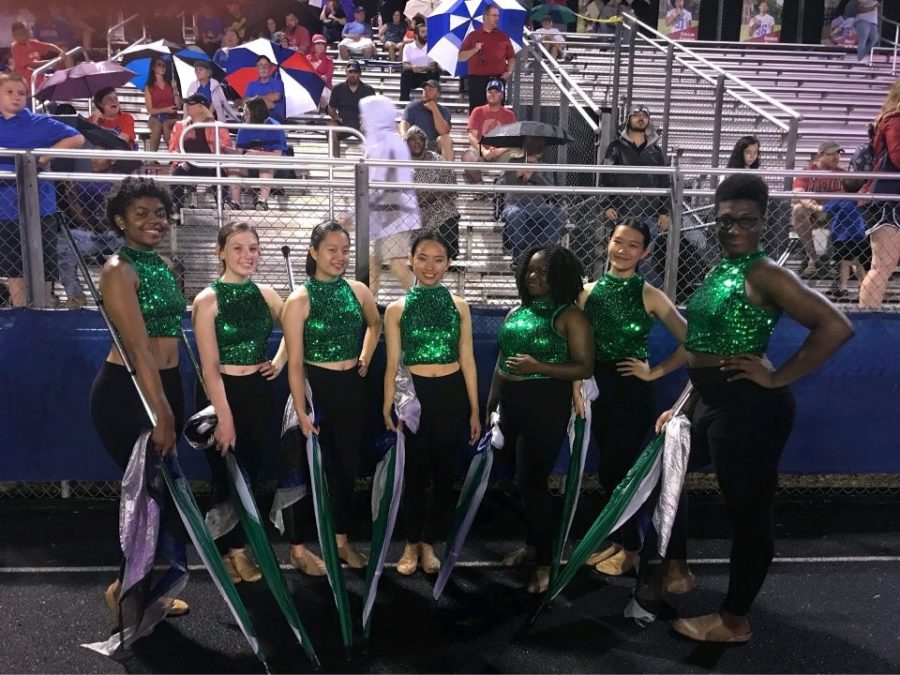 The color guard team, composed of 7 members, performs at Friday night football games alongside the marching band. The captains of the team are sisters, Brandy and Molly Yuan.

As you look to the field during the football halftime show, you may spot a new addition to the cheerleaders and band entertaining the crowd. For almost ten years, White Station High School has not had a color guard team, but this year, with the help of Molly Yuan (10) and Brandy Yuan (12), the tradition has been brought back to the field.

The creation of this team started with Molly Yuan’s dislike of the cymbals. Since she plays the oboe, a concert instrument, Yuan was asked to play the cymbals while marching. Yuan asked Mr. Sims, the band director, if she and her sister could start a marching band dance team so she could still participate without playing an instrument, after realizing how labor intensive the cymbals were.

“Mr. Sims was able to contact a color guard coach from the University of Memphis, and flags were introduced into the picture. From there, we transitioned into a color guard team, and that’s how we got here,” Molly Yuan said.
Seven dancers were chosen in May and August to make up the team, and since then, they have been motivated to learn new skills and build a foundation for future members..

“Personally, I want every member to improve, which we have already seen in a short period of time,” Brandy Yuan said.

The team practices on Tuesdays and Thursdays from 2:30 to 5:00. A majority of the time is spent perfecting the choreography for their fieldshow performed alongside the band on Friday nights. The members also practice their floor sequences, incorporating their ballet and jazz techniques. During their time together, the team has become a close-knit group working toward showing White Station what the color guard sport entails.

“I just want this team to become a family,” Molly Yuan said. “Thankfully, I think we’ve already accomplished that.”