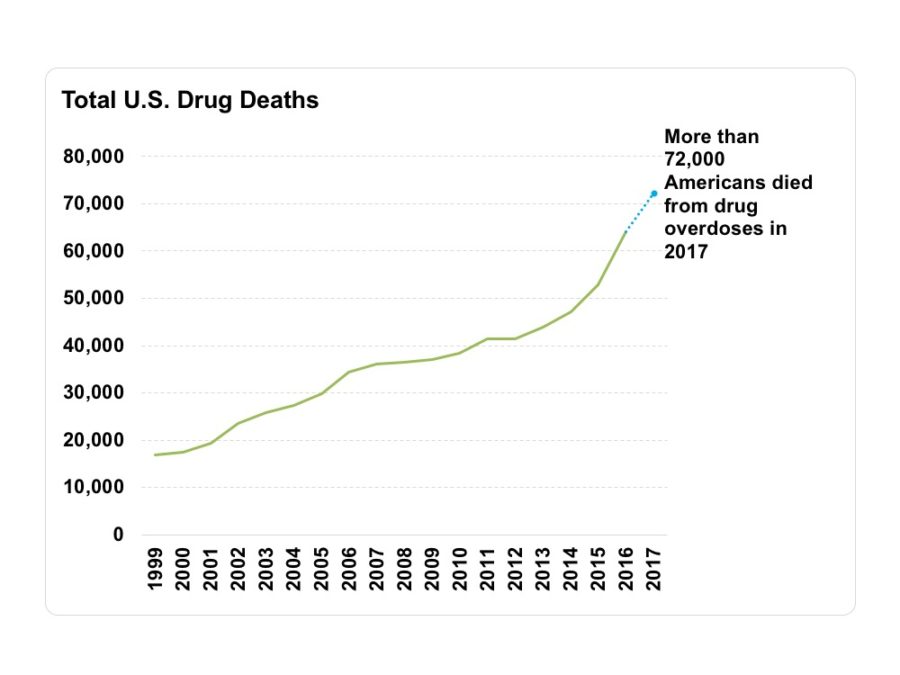 Over 72,000 Americans died from drug overdoses in 2017, a two-fold increase over only a decade.

2018 has been a year of tragedies in the entertainment industry. Most recently, rapper Mac Miller, an internet success story who topped the charts in 2011, died from an apparent drug overdose at just 26 years old. Though substance abuse is often taboo, Miller openly rapped about the topic and even spoke in interviews about his addiction to prescription opiate cough syrup. The rapper gained popularity by writing lyrics about his struggle with mental illness and addiction.

Mac Miller’s passing triggered nationwide grief, with many fans holding tributes and vigils for the late artist. Students at White Station who were fans were heavily affected by the news.

“When he died, knowing that I can’t listen to new music from him ever again, it was really depressing,” Sterling Parson (12), a long-time fan of Mac Miller, said.

Many other stars in the past suffered from substance addiction, including Elvis Presley, Marilyn Monroe and Michael Jackson, and in more recent years, Demi Lovato and Lil Peep.

“I couldn’t go 30 minutes to an hour without cocaine, and I would bring it on airplanes,” Demi Lovato said in her 2013 interview with ABC News.

Lovato began her road to recovery soon after; however, addiction is known to be a lifelong disease. The artist’s new single “Sober” suggested that she was suffering a relapse. On July 24, she was hospitalized for a reported drug overdose.

“Drugs, people don’t take them seriously enough. A lot of people do drugs but they always think, ‘It won’t be me’ or ‘I won’t get addicted’,” Nyla McCranie (12), a fan of Lovato and Miller, said.

Addiction is a disease that can affect anyone, regardless of status or wealth.

“Drugs can affect anyone no matter how much money you have. Celebrities have all these cars and clothes, but on the inside, something’s wrong,” Jan-Vincent Waller, one of White Station’s Contemporary Issues teachers, said.

Young stars often fight the disease of addiction in silence. The stigma attached to addiction only makes it more difficult for people to seek the resources they need in order to recover. Following Miller’s death, multiple stars came forward with their own stories of addiction and sobriety. One of the most compelling tributes came from Macklemore, who has also been open about his struggles with substance abuse, urging those suffering not to be ashamed to seek treatment.

Although Miller’s admirable openness about addiction may not have been enough to help him overcome it, he and all who have shared their own journeys help dispel some of the shame that surrounds the issue.