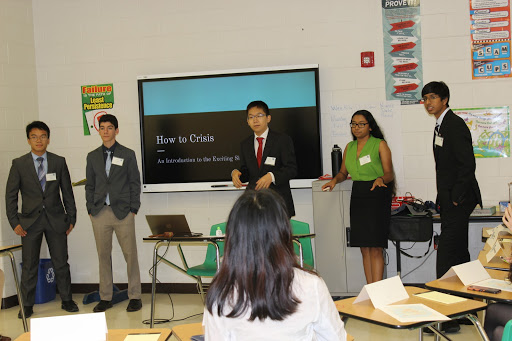 The day kicked off with a talk from Dr. Catherine Phipps, the Director of International Studies at the University of Memphis. In her speech, she discussed her time spent living abroad in Japan and her work with the U of M. She encouraged students to continue to pursue their interests in global studies.

After the presentation, the delegates broke off into various meeting rooms to begin their respective committees. With nearly 100 students in attendance the conference had several committees which covered topics ranging from ISIS black market trading to water-borne illnesses.

Each delegate had the option to make a donation to UNICEF, the United Nations Children’s Fund, and the committee that raised the most money won a prize. The World Health Organization committee members raised over 80 dollars towards UNICEF, and they were rewarded with privilege of throwing pies in the faces of Yash Khiraya (10) and Shridhar Athinarayanan (12).

In each committee, the co-chairs chose one best delegate, one outstanding delegate and one verbal commendation. After the awards were presented, Raj closed WSHSMUN IV.

“Your commitment to pursue the wonders of international politics as well as honing your debate skills,” Raj said, “is what makes Model United Nations not just enjoyable for me, but for every delegate in this room.”