White Station triumphs over Arlington in a high scoring affair 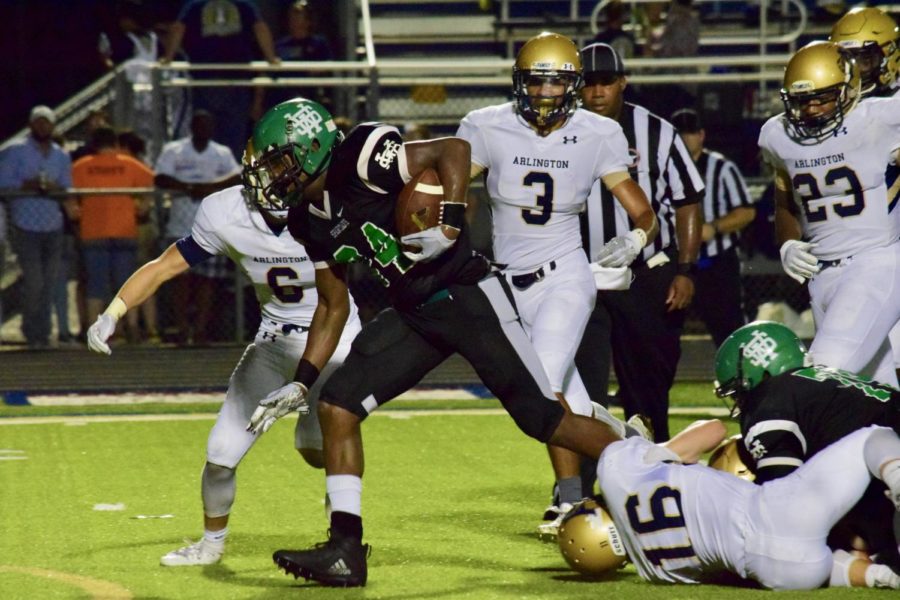 Eli Neal (12) escapes an Arlington defender on his way to the end zone. Neal troubled the Tiger defense all night, ending the game with three touchdowns.

White Station and Arlington have an exciting history. Last season, the Spartans and the Tigers split the season series 1-1, with both games being won by last-second plays. This recent matchup kept the trend alive, with 12 total touchdowns scored, four of which came off of kick returns.

This offensive battle began early, with Travis Lewis (11) scoring on a long run for a touchdown with 8:30 left to go in the first quarter. White Station added another touchdown around the three minute mark, and entered the second quarter leading 14-0.

White Station’s Eli Neal (12) answered an Arlington touchdown with one of his own, his first of three on the night. Arlington then forced a turnover, and promptly scored; however, just as the momentum looked like it was beginning to shift in Arlington’s favor, Titus Goldson (11) took the ensuing kickoff to the end zone, giving White Station a two-touchdown cushion. The Spartans ended the first half leading 27-21.

It was in the third quarter that an already vibrant White Station offense hit another gear. Behind a thunderous band and a roaring student section that had been working together all night, White Station scored three more touchdowns, starting with a 30-yard run by Bryan Young (12) and ending with two more powerful rushes by Neal. This pushed the Spartan lead to 20 points, as they led Arlington 48-28 going into the fourth quarter.

By the time the fourth quarter came, it was no secret that White Station was riding a wave of momentum, which was enhanced by the visiting Spartan crowd outnumbering the Tiger fans by the middle of the final quarter.

Jaylen Caver (10) ran in the final Spartan touchdown of the night, giving the Spartans a commanding lead of 54-35, and ending the best offensive performance from White Station this season. They will look to use this momentum to their advantage next week against Bartlett.