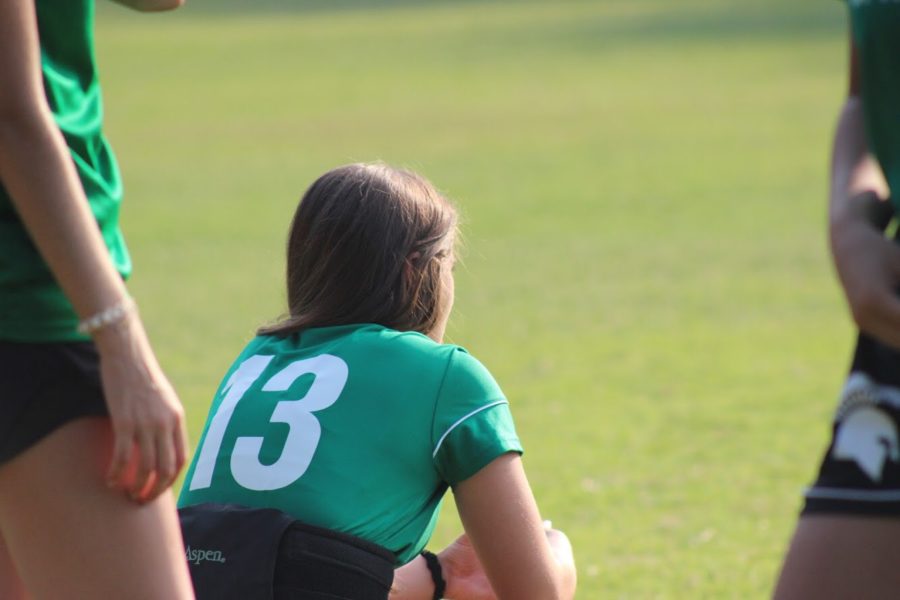 From the sideline, senior Amy Eleogram watches her team competing against the Bartlett Panthers. Due to a spinal injury, Eleogram, one of the varsity captains, is out for half the season. However after attending physical therapy once a week, she will be able to return to the field early September.

Fall is a time for “firsts”: the first day of school, the first big game, the first big win; however, two athletes, Amy Eleogram (12) and Elise Kelley (11) have been sidelined by injury—forced to watch their teams’ “firsts” from the bench.

Eleogram was excited for her last high school soccer season, especially since she is one of the captains on the girls’ varsity team. Mid-July, she started noticing pain in her lower back, but she continued to practice on it for two weeks. Eleogram was diagnosed with a stress fracture in her L5 vertebrae, a common injury for young athletes that overtrain. Later, when she returned for her follow-up appointment, her doctor found no evidence of a fracture—either the fracture healed rather quickly or it was actually a stress reaction.

No surgery is required, but she attends physical therapy once a week. If everything goes well, she will be able to return to the field early September.

“It’s kind of depressing because it’s not a fun way to start my last soccer season, but I like physical therapy and learning how to be a stronger and safer athlete,” Eleogram said.

Choosing to look on the bright side, Eleogram believes this is a great opportunity to be able to observe the team as a whole.

“While [the other captains] are playing, it gives me time to focus on helping other people, since I can’t be focusing on my own playing,” Eleogram said.

Also sidelined by an injury, Kelley tore her left hamstring while at a choreography clinic that the competitive cheer team attended this July. One of the coaches stretched her leg in preparation for a stunt, and in doing so, caused something to “pop” in Kelley’s leg. She attempted to push through the pain, but it was clear that her injury was not one that could simply be walked off. A doctor’s visit and subsequent MRI determined that she had, in fact, torn her hamstring.

“If physical therapy therapy doesn’t work, then I will have to have surgery that would physically put my hamstring back together,” Kelley said.

Using crutches and a brace, she will be out for at least a month, much to her dismay.

Still, she attends every cheer practice and learns the choreography so that when she is eventually cleared, she will be all caught up.

Impatiently resting during their recovery periods, both Eleogram and Kelley are eager to get back on the field and back on the mat.