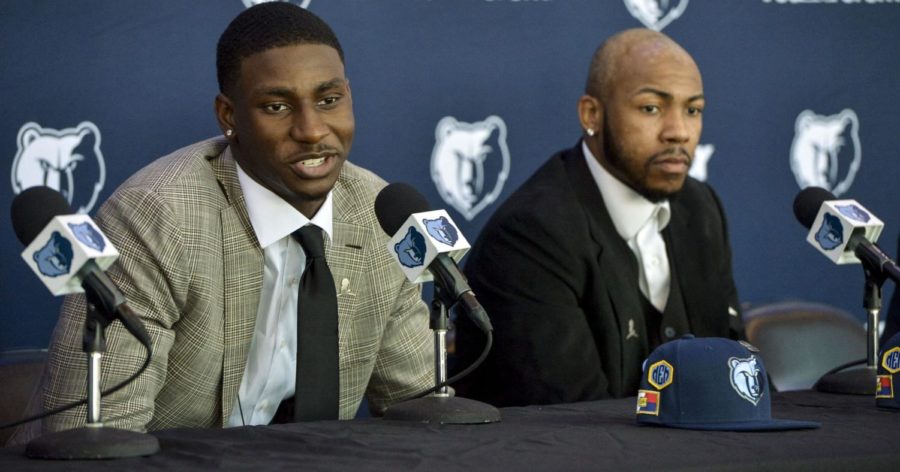 Rookies Jaren Jackson Jr. and Javon Carter speak to the press after being drafted by the Memphis Grizzlies. They were two of the signings that helped contribute to an eventful summer in Memphis sports.

For students, summer is a relaxing, drama-free break from the stress of school. However, in sports, summer is arguably the busiest season of all, filled with huge announcements, new players and major changes that often shape the upcoming season. Sports in Memphis certainly followed suit, with the introduction of new faces, new teams and new expectations to the city and its fans.

“You’ve got to hope that they can say this is an NBA roster of coaches that kind of been where I want to go and that they can teach me to be a pro on and off the court and go further than that,” Hardaway said during an interview with the local press.

Hardaway scored his first big recruit for the Class of 2019, signing local East High forward Malcolm Dandridge, who is rated as a 4-star recruit by 247Sports. Dandridge has played for Hardaway previously at East and has done his part by recruiting his fellow teammates to become Tigers, including 5-star talent James Wiseman, who recently made the decision to stay at East for his senior season.

“I’m definitely working [on recruiting others]. I just be honest with them,” Dandridge said. “How better can it get than an Ex-NBA staff.”

The Grizzlies traditionally have stayed relatively quiet during the offseason, but they were thrown into the spotlight of the NBA’s marquee offseason event when they ended up with the 4th pick in the NBA draft. With that pick, they selected forward Jaren Jackson Jr. from Michigan State.

Jackson looks forward to his new role in Memphis.

“I’m just trying to come in and extend the culture they’ve already set. I think the unique thing about Memphis aside from other teams is we have a unique mix of a bunch of different things,” Jackson said to the press.

Jackson’s first exposure to the pros came during the NBA Summer League, where he showcased his potential, averaging 11.2 points, 8.2 rebounds and 3.8 blocks per game. Second round pick and former Big 12 Defensive Player of the Year Jevon Carter also made an impact, showing off his defense with 1.1 steals per game.

The Grizzlies also made some moves in free agency, signing forward Kyle Anderson from the Spurs. Anderson will be expected to handle the ball and facilitate the offense, giving guard Mike Conley more opportunities to score off-ball. All three will see the court this season, adding to Memphis’s “Grit ‘N Grind” philosophy, which is being revived by head coach J.B Bickerstaff.

Pro Soccer is Coming to Memphis

Those who have always held allegiance to a soccer, or fútbol, club out of the state, country, or continent, are in luck: Memphis is getting a pro soccer team. With help from USMNT legend, and Memphis-area resident, Tim Howard, the MLS affiliated USL, or United Soccer League, has announced that Memphis will be one of six other cities getting a team.

They will play in AutoZone Park and will be coached by Tim Mulqueen, who has experience with the USMNT and MLS team Orlando FC.

There will be an event held in AutoZone Park on Sept. 1, which will include a match between the MLS’s Colorado Rapids, whose star player is Tim Howard, and the USL’s Tulsa Roughnecks. The event will also feature the team’s name and logo reveal.

Overall, this summer ushered in fresh new changes and players to Memphis, providing many reasons for fans to be excited.