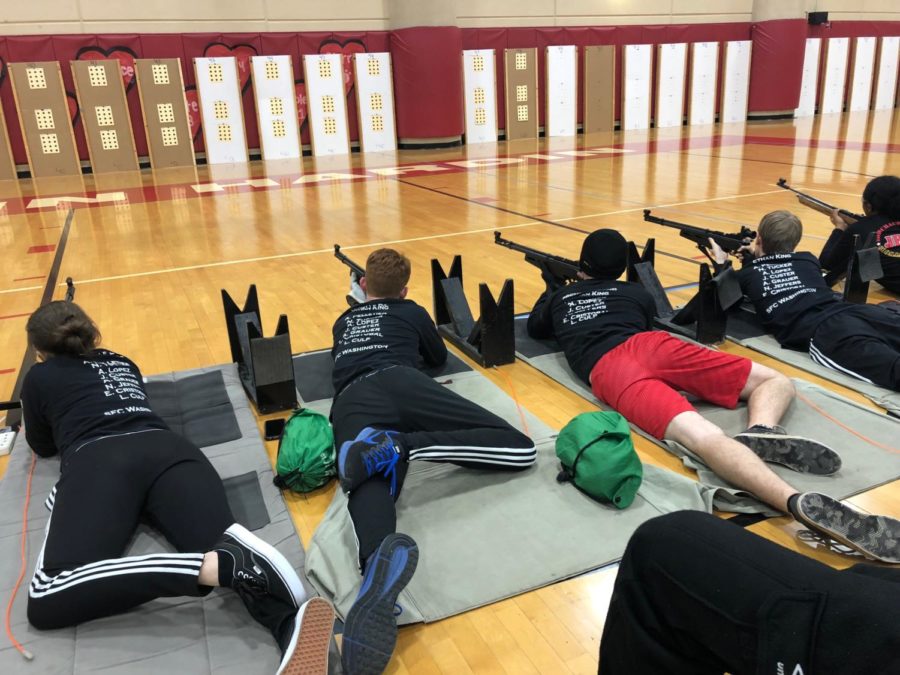 Marksmanship team captain Michelle Bond (12) did not want to be in JROTC. As a freshman, she was placed in the class mistakenly, but after a few days of attending, Bond realized she loved the unconventional classroom setting. Instead of just sitting and listening to lectures and taking notes, she was engaging in physical activity comparable to that of a gym class.

That same year, she also joined the marksmanship team. Being a part of both for so long has allowed her to rise through the ranks.

“I’m on JROTC staff as the XO [executive officer], and I’m the captain of marksmanship, but my rank is still Cadet Major,” Bond said.

Shooters can each earn a maximum amount of 300 points, and with four shooters, a team can earn up to 1200 points.

“When we went to the 7th Brigade [competition] in Fort Knox, Kentucky, we shot 1010, and I’ve been here for seven years, and we’ve never, ever shot above 1000,” Sergeant First Class Washington said, “so that’s what made this year so great for Marksmanship team.”

This year, the team performed better than ever before. At the competition, the team placed fifth out of about 50 schools. SFC Washington, who oversees the team, attributes this success in part to Bond’s excellent leadership.

“Michelle was chosen to be the captain because [she] has been on the team for four years, and out of all of my firers, or shooters, Michelle has been the most consistent,” SFC Washington said. “Also, Michelle has a very high degree of leadership. Michelle’s a force to be reckoned with.”

SFC Washington considers Bond his “right-hand man…or female,” and as such, she helps him narrow down which four of the eight shooters should compete on a certain day.

Bond’s dedication and skill has stood out, not only to her superiors, but also to her peers.

“[Bond’s]… one of the highest firers that we’ve ever had,” Executive Officer of the marksmanship team, Ethan King (12), who functions as her co-captain, said. “She’s really good, and she knows what she’s talking about, so she can lead.”