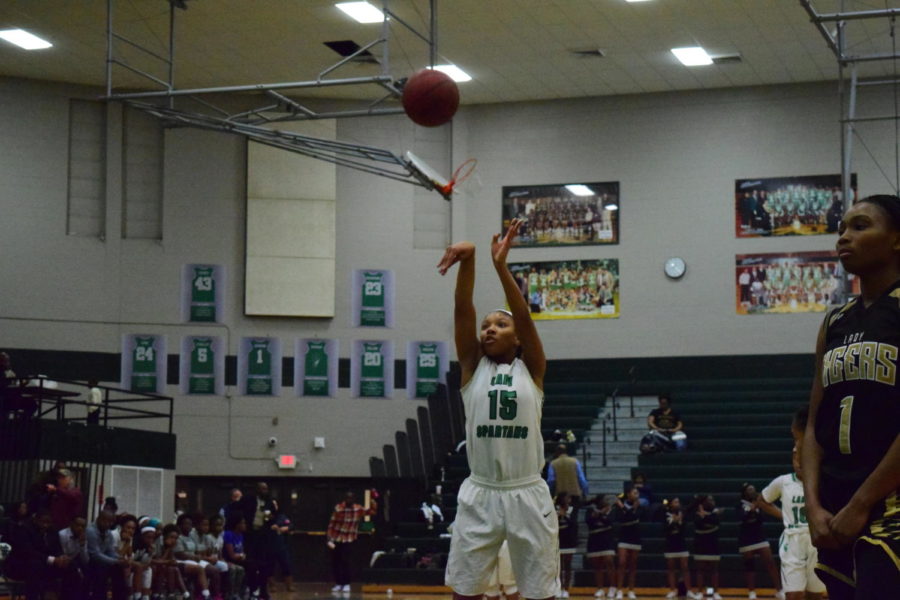 Brittni Moore shoots a free throw in a close game against Whitehaven.

Only two seniors remain on the White Station Lady Spartans basketball team. Last year, there were eight. Despite the numerous exoduses, the team continues to compete and achieve.

Senior leadership is important to any high school sports team, especially basketball. So, when the eight talented class of 2017 players graduated, the reigns were passed down to the next generation. Brittni Moore (12) and Jasmine Jones (12) are the lone seniors on a team brimming with young talent.

Moore has been a member of the varsity Lady Spartans team since freshman year and has taken over this season as the team’s primary leader and captain. She has had a stellar season so far and has committed to play Division 1 NCAA basketball at The University of Tennessee at Martin next year. While Moore acknowledges that the team is in a tough position, she remains confident in their ability to adapt and stay competitive.

She does not hesitate to give guidance and advice to her younger teammates as a vital veteran team leader.

“I try to push some of my juniors and sophomores to develop leadership roles for when I leave,” Moore said.

Two of the tougher teams White Station will have to defeat to reach the state tournament are Whitehaven and Central. In the two regular season games that White Station has played against them, both games have come down to the wire; the Spartans secured a four point win at Whitehaven, but suffered a close loss in a thrilling homecoming game versus Central.

Head coach Tommy Warren stresses the importance of persisting against the odds and never giving up. This mentality has motivated the Spartan team to success this season. However, attitude and confidence can only take a team so far; upperclassmen players stepping up as leaders is what will take this team over the hump. As of February 1, the team is 9-4. Playoffs loom close ahead, and they will give the determined Lady Spartans an opportunity to prove themselves.