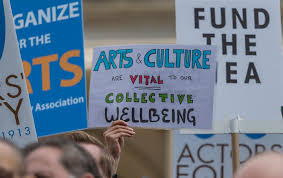 The Trump Administration has been making a series of changes since the president’s inauguration, and one of the first things he has proposed is reforming government spending in the arts and humanities. The president’s budget calls for big cuts in almost all areas of social programs including the National Endowment for the Arts (NEA) and the National Endowment for the Humanities (NEH).

The National Foundation on the Arts and Humanities Act established the NEA and the NEH to, as the act states, “promote progress and scholarship” in the humanities and the arts. The clauses in the act go on to say that it is necessary for the federal government to aid programs in local, state, regional and private companies.

“It’s a program that Congress set up at some point where tax dollars go into it and helps give grants for different art projects,”World History and U.S. Government teacher Curt Rakestraw said.

These projects can range from city art murals to high school theater programs. Without this funding, many of these programs may have to be cut as they rely heavily on these grants.

Trump is proposing to eliminate the endowment all together-the first time any president has suggested such a measure. Money normally allocated to the programs will be transferred to other areas, most notably, the military. Overall, President Trump wants to cut the funding for programs that he does not deem necessary. He believes that the government has a vested interest in protecting the country but does not think that people’s tax dollars should be going towards supporting the arts. Rather than government spending, his administration looks to the private sector like charities and churches to finance arts projects.

Unfortunately, if Trump does follow through on his budget proposal, it would have a detrimental effect on arts and humanities students in school. Every year, each school is granted a certain amount of money to be given to the respective departments.

“Whenever we receive any money, we always put it towards shows because we always buy sets, costumes, props and set pieces to build the sets, and it’s actually really hard especially when we don’t have supplies to make the sets,” White Station theater student Ashley Allen (12) said.

Without the additional funding from the government, all of the purchases have to come out of the pockets of the artists themselves. The lack of resources may inhibit the ability of the artists to hone their skills and further their careers in the future.

“If I don’t have the resources to study and learn what it’s going to be like in the professional world, then I won’t be as good as someone else,” Allen said.

In the future, students may not be exposed to the arts and humanities because there simply will not be enough funding in those departments. Theater productions, concerts and art shows could become almost non-existent.

There are many students who see the defunding as a threat to their interests and are worried that this would exacerbate the disparity between core classes and the arts.

“Obviously, there’s a huge difference between the two since people don’t take the arts seriously as they [do] core classes, but I think it also falls on the department to put out good work and generate good work so that we get boosters and donations,” Raejah Bratcher (12) said.

The defunding could lead to decreased enrollment and availability of arts and humanities programs, which affects the hundreds of students taking arts and humanities classes at our own school. The irony is very clear in this situation. The very program that Congress had deemed central to Americans was put in place only to be, ultimately, taken away counteracting all of the positive effects that came out of it. However, nothing is set in stone just yet. This action is only a budget proposal, so we have yet to see what the results would deem.