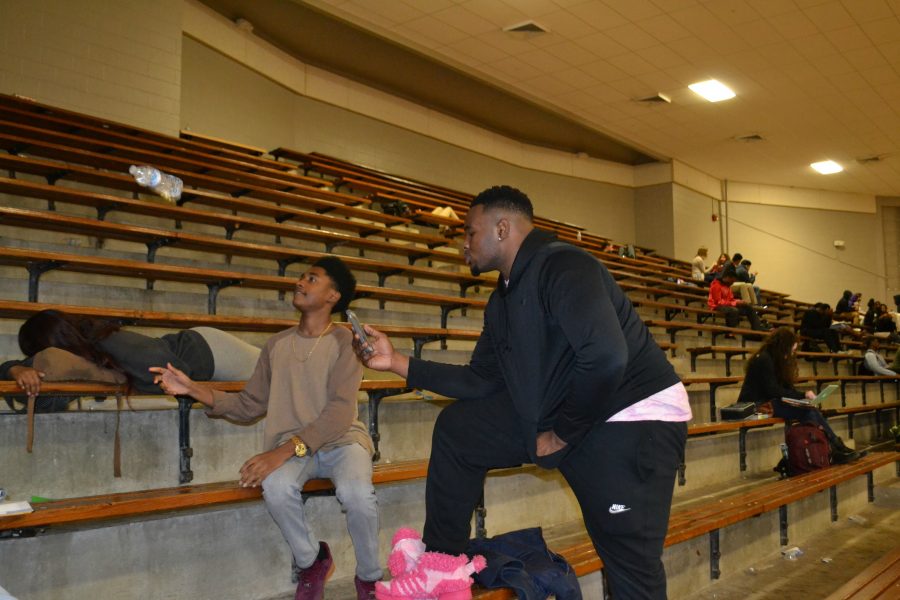 Marico Colbert (11) and Darrel Howard (12) flip a water bottle for a vine.

Flipping water bottles, music covers and the running man challenge are just a few of the famous trends that Vine has produced. The app allows users to create six second videos meant to entertain. Some people use it for funny videos, some for music and others for aesthetic images. No matter which aspect of Vine you prefer, this app became very popular with a lot of people very fast. In December 2015, this platform had over 200 million active users.
Released by Twitter, Vine was a totally new kind of entertainment app that quickly turned into a social media platform. Many people started making vines just for fun, but a few people gained a notable following. It didn’t take long for people to realize that they had become somewhat famous through Vine. We would have never heard of Nash Grier, Lele Pons or even White Station graduate Darius Benson if it wasn’t for Vine. All of these stars have now moved on to bigger and better things, but most attribute their discovery and beginning of their careers to Vine. Some are in movies or TV, plenty of musicians have been discovered on Vine, and plenty are now involved in modeling or advertising.
Vine wasn’t just for the famous, though. Many people loved and used this app, but sadly, the time for Vine has come to an end. Earlier this fall, Vine announced that their app will no longer be available. Almost all of the famous Viners have moved on to bigger and better things, and do not use Vine as much anymore. As a business corporation, Vine must cater to its famous users and money makers, but there are millions of other Viners who used Vine as their creative outlets. The death of Vine has been tragic news to many people, especially at White Station.
“The death of Vine has upset me greatly,” Reanna Ruddick (11)
Ruddick used this app every day posting new vines and revining other people’s videos. It was really important to her.
“The only way I can function in the morning is if I watch Vines before school and before I sleep,” Elizabeth Boyer (11) said. “It’s just like watching TV or Netflix or Instagram. It’s entertaining.”
Vine was a huge part of a lot of students’ lives, and it will be missed. R.I.P. Vine, Inc.