See you at the pole 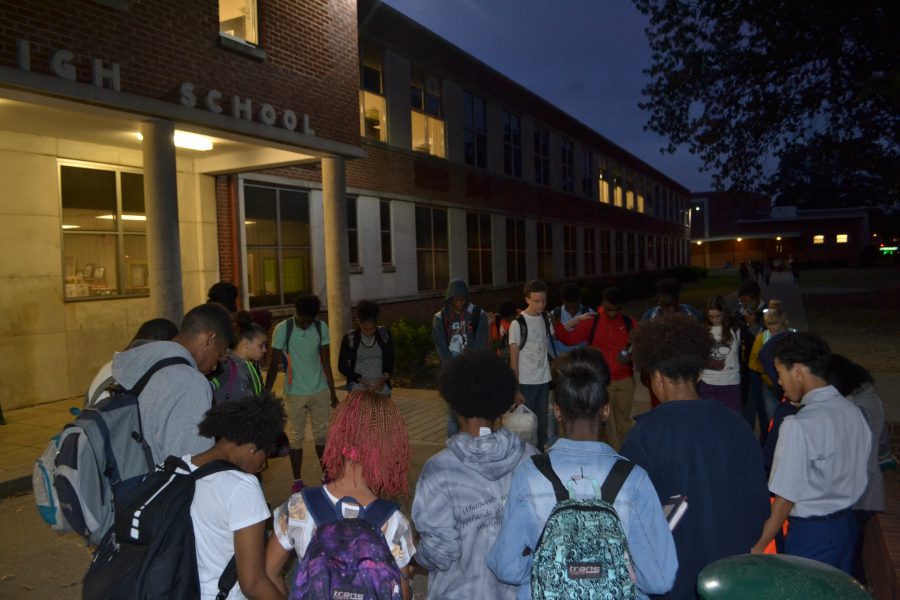 White Station students gathered in front of the school to pray

Walking to class on a Wednesday morning, you can see groups of students gathered around the flagpole. But they are not studying, gossiping or even really talking. They are praying.

Last November, White Station students gathered in front of the school for the We Cry Out movement’s day of national student prayer. The prayer gathering was organized by students from the Memphis Church, New Direction’s youth ministry. It was meant to be a one-day event, but due to to the large turnout and excitement of the crowd, students Alana Farris (11), Alexis Anderson (11) and Deaira Thompson (12) decided to take it a step further.

“There is a national day of prayer at the pole, [and] we started off with that last year,” Anderson said. “We got the results back and saw how everybody liked it, so we said, ‘maybe we should keep on doing this.’”

Prayer at the Pole then became a weekly occurrence. Every Wednesday morning at 6:55 a.m., students meet in front of the school for worship and “God moments,” which is when students share something positive that happened to them during the week. At 7 a.m., the floor is opened for prayer requests.

Although Prayer at the Pole was started by a Christian church, the prayers attract people with different religious beliefs.

“It creates the feeling of unity,” Neil Verma (12) said. “Everybody is together. There’s no boundaries, no discrimination. Anybody’s allowed. I’m not Christian, and I go. So if you want to come, then you can and there’s nothing stopping you.”

Other non-Christians, however, have negative experiences with the prayers.

“Having to dodge a giant group of worshippers while walking into school threatens a neutral learning environment,” Nora Goodman-Bryan (11) said. “As someone who has grown up Jewish, I did feel, from what I heard, that it was exclusive to other faiths.”

Acknowledging that many people at school are not Christians,  the students who brought Prayer at the Pole to White Station still try their best to make everyone feel included while also sparking a change.

Although the purpose of Prayer at the Pole is to unite students to make positive change, some feel that publically expressing religion at school is not the way to do it.

“It’s not that I don’t agree with with the purpose; I have a problem with the execution,” Goodman-Bryan said.  “For this to happen at a public school, around a flag that is supposed to represent a country in which church and state are separated, is, in my opinion, a violation of the Establishment Clause. I am fully supportive of students forming groups to bond over and work towards causes, but when they violate my rights, I have a problem.”

White Station is a school filled with many diverse students with many different religious beliefs. In order to have a positive learning environment, it is important that students find an equal balance of expressing their beliefs while also respecting the beliefs of others.