The Twilight Zone: The demise and rise of Memphis Tigers athletics 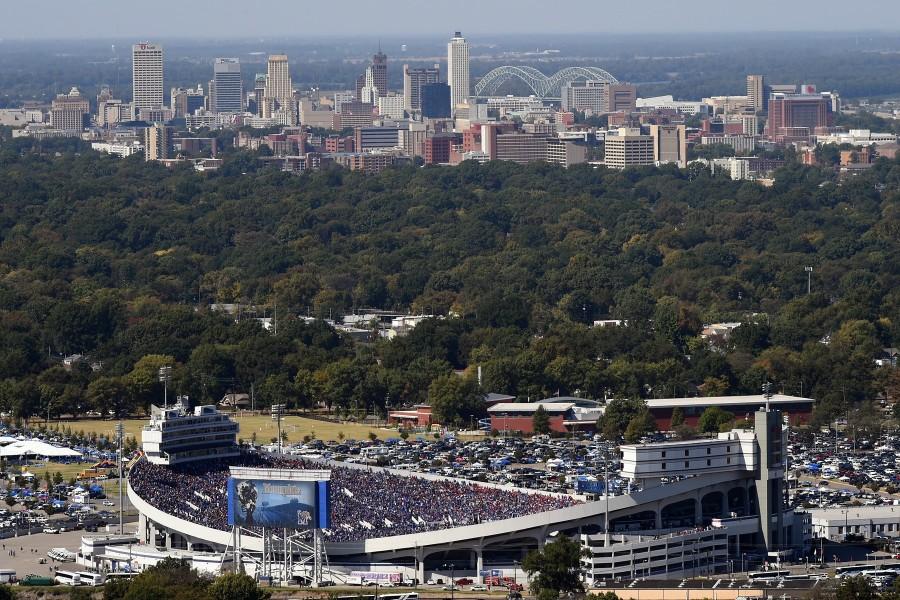 In the two seasons Larry Porter was the coach at the University of Memphis attendance reached 33,851 per game in 2014, a thirty three perecent increase in a measly two seasons.

The addition of Coach Fuente is definitely not the only driving force behind the team’s newfound success. Quarterback and potential NFL prospect Paxton Lynch has shown steady improvement in his three years on campus, and he currently sits at number thirty two on CBS sports’ NFL big board, and the number two quarterback overall.

As far as the general media reaction towards the team goes, the local reaction trumps the national reaction.  As a team residing in a non power five conference, Memphis is left in the shadows of the more notable college football juggernauts, but this team and this city are certainly taking strides to break into the light. They have a big team mentality but are provided small team resources and media.

When it comes to Memphis basketball, national attention has not been an issue for the team. The issue is how Memphis has performed when they receive national acclaim that is hurting this program. Head coach Josh Pastner may have a career 148-58 coaching record, but only one of those victories came over a ranked team. After a 18-14 record last season that did not take the Tigers to a tournament, coach Josh Pastner and his team are trying to rebuild the program.

“We are all working hard to improve and get better. Playing the right way is important to all of us,” Pastner said in an exclusive interview with the White Station Scroll.

As far as Pastner’s goals and expectations for the season go, he has his mind set on what this season should be.

“We just need to undersell and over perform. Play the right way and get better every day we take the floor,” Pastner added.

“The Lawsons and the young guys will have to contribute and produce right away for our team to have success,” Pastner said.

In a town that has always been seen as a basketball city, the pressure for the Tigers’ basketball team to succeed will definitely be amped up a notch due to the recent success of the football program.

“The better the football team does the better for men’s basketball. I am a big Coach Fuente fan and a big [football] fan,” Pastner said.

This season’s basketball schedule features a plethora of challenges, including out of conference games versus Oklahoma, Ohio State, South Carolina and rival Ole Miss, while the powerful Southern Methodist University Mustangs are featured in conference play.

Despite transfers and criticism, there is no doubt that Memphis Tiger basketball will have the city behind them.

Memphis fans from all over the city gather at these games to create some of the greatest atmospheres seen in the area; however, as time progresses, the Tiger game experience for both basketball and football has changed significantly. As the football team experiences one of the greatest seasons in University of Memphis history, the fan base is stronger than ever before. One White Station student, from a family of devout Tigers football and basketball fans, has seen the change in the Tigers football game experience first hand.

“The football games have always been really exciting but I guess you could say they’ve gotten more ‘lit’ since we got better,” Katelyn Sobral (10) said.

Tigers basketball, however, is a bit of a different story. Since the departure of former head coach John Calipari, the Tigers fanbase has seen a decrease in energy in the game atmosphere. However, Coach Pastner and his team are doing whatever they can to bring back the energetic atmosphere this fan base feeds on. The Tigers have already started the season strong with wins over Ohio State, Southern Mississippi, Grambling and a nail-biter loss to a top-ten University of his, the men’s football team won three games. Four seasons later, in the first college football playoff rankings of the season, the Tiger football team came in ranked at number thirteen.

For years the athletic program at the U of M was centered around basketball. With the help of former coach John Calipari and a number of different top high school recruits, the team took itself to the 2007-08 NCAA National Men’s Basketball Championship game where they fell to the University of Kansas in overtime.

In a follow up of their 2007 National Runners up campaign, the roster featured high profile players Robert Dozier, Antonio Anderson and current New Orleans Pelicans star Tyreke Evans, and the team reached the Sweet Sixteen round of the NCAA tournament, where they fell to Missouri. Four days after being defeated by Missouri in the regional semifinal, coach John Calipari announced he would leave the university for the basketball juggernaut University of Kentucky. With Calipari’s departure came the loss of high school recruits including Xavier Henry, John Wall, Demarcus Cousins, Eric Bledsoe and many other future freshmen who took their talents to Kentucky in the hopes of making it to the NBA under the tutelage of coach Calipari. In wake of Calipari’s departure, the University of Memphis hired Josh Pastner, a former member of Calipari’s staff, as head coach. Since the coaching change prior to the 2009-2010 season, the culture of Memphis basketball has undergone a major change, as well as Memphis athletics all around. However, no program in the nation has undergone one quite as drastic as Memphis football.

Ever since the 2011-12 football season when Justin Fuente was named head coach, something about Memphis football has felt different: the presence of hope. Building on last season’s ten win campaign and Beach Bowl victory over Brigham Young University, the Tigers football squad rocketed out of the gate this season to an 8-0 start, including an upset win over Ole Miss. However, their ranking has fallen from losses to the  Navy, Houston and Temple. In a stadium that seats 61,008, the program had an average attendance of 11,197 per game in head coach Justin Fuente’s first season. The Tigers’ average home gaOklahoma team.

“Although they aren’t as good as they used to be, I think they are getting a lot better and the game experience will go back to how it once used to be,” Sobral added.

On November 28, 2015, after the Tigers football team beat Southern Methodist University in a landslide 63-0 win, it was announced that head coach Fuente would replace Frank Beamer as the new head coach of Virginia Tech. The city’s celebration of the win was soon met with curiosity as fans began to wonder who would replace the most successful coach in recent memory. Although this is a big loss to the organization, the Memphis Tigers have everything to look forward to as they continue their dynasty. Under the direction of a new coach Mike Norvell, this team is looking to march into the 2016-17 season. Coach Fuente brought a culture of winning to this team when he arrived in 2011. He led this organization from a one-win season in 2010 to one of the greatest seasons in University history. He brought together a somewhat broken fan base and united a city in ways somewhat unimaginable. His efforts will truly forever be remembered by the University and the fan base as a whole

Both of these programs have seen treacherous obstacles and incredible victories. They both play against numerous odds in doubted and underrated conferences. However, they always seem to bring that blue-collar mentality that is Memphis sports wherever they go. And instead of referring to the University of Memphis as a “football school” or a “basketball school” one thing is for certain: Memphis athletics are on the rise, and the programs have just begun to scratch the surface of their true potential.