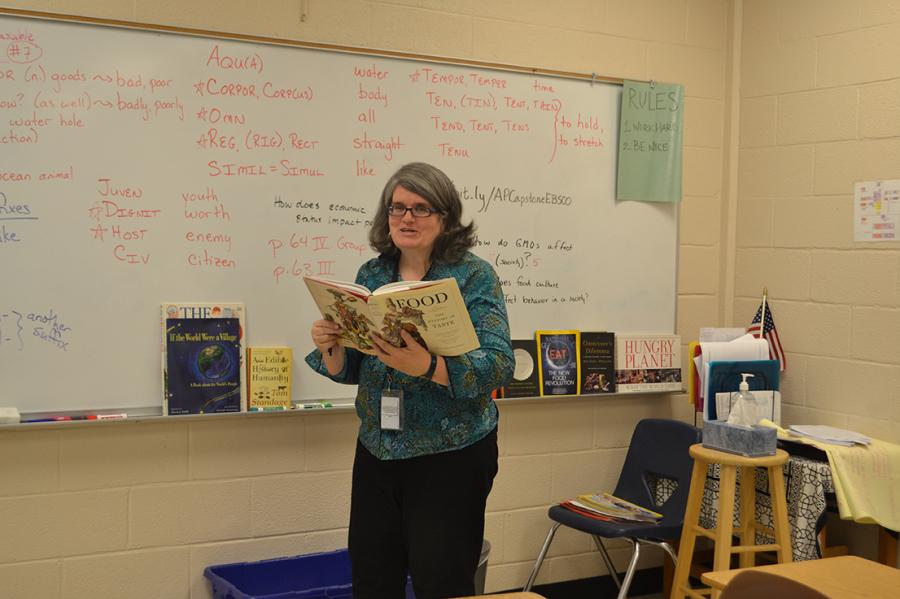 Mrs. McFalls has taught English III Honors and AP Seminar at White Station. After 22 years of teaching, she will be greatly missed.

This year, White Station has made countless changes: uniform policy, starting time, new teachers. Among these, White Station has added new classes.
News of the AP Capstone class is buzzing; however, many students are unsure of what the course entails. White Station is one of the honorable three Tennessee schools that was invited to implement an AP Capstone course, which Lori McFalls teaches.
The AP Capstone class is centered around QUEST: Question and explore, Understand and analyze arguments, Evaluate Multiple perspectives, Synthesize ideas, Team, Transform and Transmit. Simply, students learn how to analyze a topic and present their findings to their class.
AP capstone is a sequence of a 2 year research program: the first year consists of discussing and analyzing a specific topic, which Mrs. McFalls chose to be food. This will help develop the skills for the second year’s 5,000 word research project. The second year hones in on creating the research paper, discussing it as a step-by-step process.
“AP capstone is everything you know all in one room; Ted Talks, music, artwork,” McFalls said.
Francesca Giorgianni, an AP capstone student, claimed that she loves the discussions and has already improved her public speaking skills.
AP Capstone has much growing room, but AP Government, taught by Curtis Rakestraw, is already popular among White Station students. Rakestraw plans to incorporate current events, like marijuana legalization, in his teaching to engage the students in discussions.
Rakestraw has an amazing year planned for his students, including congressman Cohen coming to talk with the class.
“Mr. Rakestraw’s class is always fascinating. He manages to keep us constantly laughing and engaged,” said Leeraz Zuo (12).
Chinese classes have also been added to the White Station curriculum. Yuan Harris comes to White Station sixth and seventh period every day to teach Chinese. Harris is from China, and she has been teaching her American husband Chinese for the past four years.
“It is so rewarding to share my culture and language with White Station’s hardworking students,” Harris said.
Chinese students learn and use new vocabulary every day, and are beginning to write in Chinese characters. Harris plans to briefly cover aspects of Chinese culture through spring and autumn festivals.
White Station has expanded its horizons this year with new curriculum that is sure to make for an amazing academic year.

Clubs provide an open door to connect with your peers and discuss, learn and help others. Choosing a club at White Station is easy with the numerous choices available and the ability to choose as many as you want.
Not only do clubs look good on college applications, but they also unite students from all different backgrounds. Students are able to meet after school or during the school day on club days. During club meetings, freshmen, sophomores, juniors and seniors can share interests, become educated on the subject of the club or work outside of school to help the local community. Signing up for clubs can be a stress reliever or a way to add onto your college application.
With posters, sign-up sheets and the former members or presidents of the clubs ready to answer any questions, the Club Fair was similar to a college fair. Representatives of certain clubs discussed each club’s purpose and expectations of the year with students.
Sandra Banna (12), president of the Fashion Club, was set up at the club fair. She said the purpose of the Fashion Club is to not only learn the rules of fashion but to “congregate and share interests.”
Banna is estimating twenty people to participate in the club this year, but would like more upperclassmen to fill the officer positions.
Also at the club fair was the Chinese Club, formerly known as the Chinese Heritage Club. Senior Karla Arcos, who manned the club’s table, said the Chinese Club was to “explore how China impacts our culture…[and to promote] diversification.”
Founders and presidents of the International Friends Club Emily Burkhead (11) and Amy Grace Humber (11) created their club after befriending sophomore Ingabire Kayihura. Along with sister Umwaly, Kayihura moved from Rwanda just last December.
“We were the first people to talk to her,” Burkhead said. “The purpose of this club is to help students from all backgrounds and nationalities to help people still learning English to get better acquainted with school and the community.”
Clubs can both establish relationships and improve the community. Clubs like Community Service Club, Optimist Club, Green Team, Big Brother/Big Sister, Make-A-Wish Club and FCCLA (Family, Career and Community Leaders of America) spend time bettering both Memphis and White Station.
Joining a club is a year-long commitment. Making sure that you have time to devote attention to all the clubs you participate in is vital. Some clubs require meetings off campus. Others require you to have knowledge or understanding of the discussion.
Whether a returning member or new comer, clubs make you an involved and invested student.